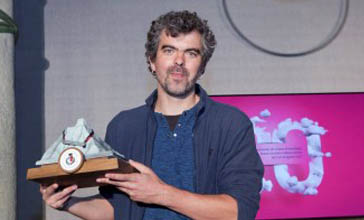 With great joy we announce that ‘Samuel in the Clouds’ has won the ‘Grand Prix des Festivals – Conseil de la Vallée’ at the Cervino Cinemountain festival in Italy! The film competed with 11 other winning films of a Grand Prix award at a Mountain Film Festival for the award for best mountain film of the year.

The jury stated the following laudatory words about the film: “The jury considers this film as a major documentary work in terms of cinematic quality, and also recognizes the impact of this film for a reflection that we should all have on the subject of global warming. In a very subtle way, this film makes us live the evolution of nature and the disappearance of things (not only the glacier, but also of certain lifestyles, such as that of the protagonist).

The attachment of Samuel to these mountains, one of great simplicity but also of a deep spirituality, touched us. The rhythm of this film, as well as a magnificent cinematography, plunges the audience
into the universe of Samuel. Living at one’s own pace, taking time for contemplation, but also waiting of snow that will surely not come back….”

Congratulations to Pieter van Eecke and his crew for this incredible prize and recognition!